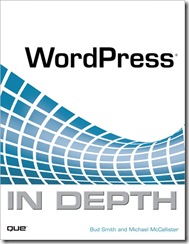 A representative of Pearson Education spotted me on the LinkedIn WordPress group and offered me a review copy of this book, and a second one to give away at the East Bay WordPress Meetup. That was more than a month ago, but I wanted to do justice to all 432 pages and actually read the book in as much depth as it had been written.

Not surprisingly, my fine-toothed comb revealed a handful of typos and printing errors, which I’ve pointed out to Pearson so they can be corrected in the next edition. They’re all fairly minor and I won’t mention them here.

There was only one omission really worth the name, and it made me wonder how many other experienced WordPress users might have overlooked this feature when it came out, because I’m pretty sure the authors aren’t the only ones. More on that in a minute.

The book is detailed but not excessively technical. I wouldn’t give it to my mom, but anyone who is computer-literate should find it accessible. The style is clear, the directions easy to follow, and the decisions about what to put in sidebars and callout boxes logical. There are plenty of illustrations and some impressively detailed tables. The book design, like the writing style, is workmanlike: it gets the job done effectively, without being especially beautiful or inspiring. (You want a WordPress book that’s beautiful, go take a look at Digging into WordPress.)

The most important thing to know about WordPress in Depth is that the first 226 pages are dedicated to WordPress.com. As the authors point out, there are very few resources, online or off, devoted specifically to WordPress.com users. When I first began using WordPress in 2005, WordPress.com didn’t even exist, so I never learned anything about it. But with a meetup to run, I thought it would behoove me to learn. After reading this book, I feel much more confident answering questions about the differences between WordPress.com and self-hosted WordPress (often referred to as WordPress.org).

I’m sure that any WordPress.com user will be able to get the most out of that service with the help of WordPress in Depth. Though, really, the more I learned, the happier I was that I’d always installed WordPress on my own site and had the full range of themes and plugins to draw on. Hosted services (I used Blogger before converting to WordPress) are incredibly limiting.

In moving from WordPress.com to installing the WordPress software on your own site, the authors take us right off the deep end: setting up a web development server on your own computer with XAMPP. It’s great to have this tutorial here, though by no means everyone who uses the .org version of WordPress is going to need a development server. It’s also good to show the steps of a manual WordPress installation. On the other hand, most popular web hosting companies offer a “one-click” installation process for WordPress through Fantastico or whatever their control panel software is, and it wouldn’t have hurt to see a screenshot or description of that process, too, though of course it differs somewhat from host to host.

The next two chapters cover themes and plugins, and here is where that omission comes into play. Every time Smith and McCallister talk about installing a theme or plugin from somewhere other than the WordPress.org/extend/ repository, they tell you to download, unzip, and upload via FTP. It seems that neither of them ever noticed the “Upload” option under “Add New” in the Themes and Plugins sections of the WordPress dashboard, which lets you browse for a .zip file, upload it, and install it.

I use this all the time, and it works extremely well, except in those few cases where the real theme folder is actually a subfolder, in which case you have to go back and move things around with FTP. Everyone who manages a self-hosted WordPress site should know how to use FTP, but why make things harder on yourself than they have to be? This feature came in with WordPress 2.8, and it’s a handy one. 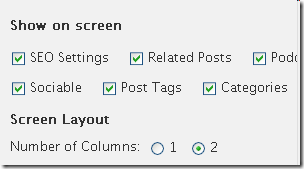 Another feature the book never mentions—and which I only noticed myself a few weeks ago—is the ability to set the number of columns for your edit window. So you don’t actually have to switch to full-screen mode (a thing I didn’t know existed until they recommended it on page 86) in order to get a wider window for your content: just choose 1 column under Screen Layout. (I don’t actually like this very much, because I have to scroll down in order to do anything, but then, I normally work on a 17” laptop, and I normally write my posts in Windows Live Writer. On my netbook, it might make a lot more sense to use the single-column layout.)

The brief overviews of CSS, XHTML, and PHP are certainly not enough to make you expert in any of those things, but they’re surprisingly helpful. (And Pearson publishes titles on all those subjects, if you want to learn more about them. Just search on their website.) You’re not going to become a ninja-class theme developer just by reading what’s here, but having it would have saved me a bit of trial and error in my earliest days of tweaking themes. And since I really knew nothing of PHP beyond what I’d cribbed from the Codex, I found the description in Chapter 15 illuminating.

I would recommend this book without reservation to WordPress.com users and to anyone who is about to make or has just made the transition from WordPress.com to self-hosted WordPress. If your main interested is in WordPress.org, however, you may find the first half of the book frustrating. While there are many things that work just the same for the two versions of WordPress, there are also quite a few differences, of the kind particularly likely to trip up beginners who are unfamiliar with the WordPress dashboard.

While not the best book for everyone, WordPress in Depth is a very good book for at least one segment of WordPress users.